The School of Life: How to Worry Less About Money

Last Sunday I went to ‘An Introduction to the School of Life’, an event that was part of the Ideas at the House programme. The School of Life is an enterprise founded in 2008 by philosopher Alain de Botton. It is based in Central London and offers a range of programmes concerned with how to live wisely and well. The School of Life recently released six books, and the authors of two of the books were speaking at this event.

While I had an interest in Tom Chatfield’s How to Thrive in the Digital Age, it was the presentation from British writer and philosopher John Armstrong on How to Worry Less About Money that really caught my attention.

John Armstrong’s book, How to Worry Less About Money Cover image taken from The School of Life’s website

Our relationship with money is lifelong

One of the first things that Armstrong said was that it is important to distinguish between money troubles (being short on cash) and money worries, which is more than a cashflow issue. He said that our relationship with money is lifelong – we come into the world to parents who were worried about having enough money for us before we were even born.

Armstrong showed us a photograph of his car, a 13-year old VW. A perfectly good car that fulfills its purpose as a vehicle, yet, why does he feel inadequacy about it? He told the audience that when he drops off his kids at school, they always ask to be dropped a block away from the entrance. In my view, this is just regular teenage behaviour, but in Armstrong’s eyes it is a symptom of deficiency. He showed us a photo of a good-looking man in a nice suit, driving a nice car and dropping his happy, proud kids off right outside the doors. “Why can’t I be more like him?”

Envy is at the root of our money worries. “It’s not surprising that cultures have told us very dangerous stories about it,” said Armstrong, giving Giotto di Bondone’s painting, Invidia as an example. Envy is commonly known as one of the Seven Deadly Sins of the Catholic Church. 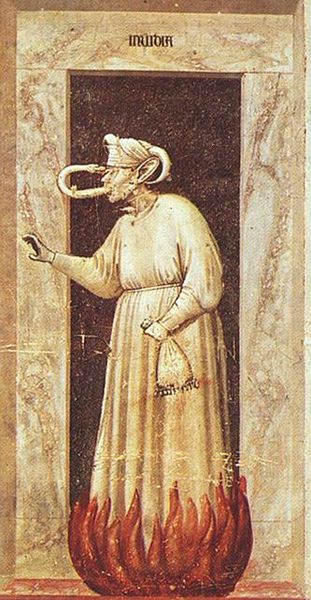 What do our money worries really mean?

“We like to think that the solution to envy is more cash,” said Armstrong, but “we can learn from our worries.” He said that we can “extract bits of knowledge and self-guidance” by asking ourselves: What does it really mean?

He showed the audience two photos side by side. On the left was a quaint hotel in Venice. Gorgeous but not as imposing as the building on the right, a massive, ostentatious hotel in what appeared to be Dubai. However, Armstrong has no desire to stay at the hotel on the right. He likes the hotel on the left far more, and upon some self-discovery, realised that it’s because two of his literary heroes, Kenneth Clark and Cyril Connolly have stayed there in the past. He said, “I’m sad about my own inability to go there,” but what his realisation uncovered was something deeper than a money worry. Armstrong realised that he wanted to be more like his heroes, but staying in a hotel that they’d stayed in wasn’t the way he’d achieve that. What the realisation ultimately resulted in was that he could convert “a money worry into a greater project.”

How much money does a person need? A common answer is, “More than that person.”

Armstrong asked the audience to consider what words come to their minds when they think about money, and gave his own example. The first thing that comes to his mind when he thinks about money are the words, “Shut up!” He explained why. When he was young, his family went to visit another family – one who was much better off financially. In the car on the way home after the visit, his younger sister, around 9 years old at the time, started raving about how amazing the house was, and added, “I wish we were rich!” He remembers himself and other members of the family telling her to “Shut up!”

He recalls the feelings they had about this event and said that as humans, “we pride ourselves on being frank…..but it’s difficult to be honest with ourselves about money.” He said that they felt inadequate and at the same time, “humiliated by its connection to money.”

Most financial advice is centered either getting by with less money, or making a whole lot more money, assuming that the amount we need is just ‘more, more, more!’ and not qualifying why. Money advice is centered on money troubles, not money worries, and as such, doesn’t take into account the deeper underlying relationship that we have with it.

Armstrong describes our needs as being puritan. “We use needs to reduce our exposure in the commercial environment.” We also need to look at what money really is – “a mechanism for saving and spending.”

The question, “How can I get more money?” should ideally be asked after we think about how much money we need and what we need it for. It is only when we come to terms with our underlying goals and desires that we can have a relationship with money that instead of centering around envy, focuses on on a healthy sense of achievement and dignity.

Putting this here because we all need a smile 😊 This was a year ago, he's somewhat leaner now!
This morning's sunrise 🌞
Its owner was a most likely eaten by a bird, but how beautiful is this wing? Like a clear stained-glass window. The world is pretty scary at the moment but there are lots of incredible things, big and small, when you take a close look.
%d bloggers like this: